Perhaps the most consensus investment advice in recent years has been for investors to allocate more funds overseas. Financial media and commentators consistently tout the merits of international investing with a particular emphasis on Europe. The primary attraction cited is valuation with European stocks having lower average valuations than the U.S. market. For example, the next 12 month price/earnings (P/E) ratio is 17x for the U.S. versus 14x for Europe. Over the past 10 years, investors have actually had net redemptions of U.S. stock mutual funds and ETFs, while adding over $1.1 trillion to their International counterparts of which Europe has been the largest beneficiary.

Lyell Wealth Management has not succumbed to the lure of Europe because it has been our view that European stock markets are cheaper for good reasons. For starters, the overwhelming majority of the best companies in the world happen to be what we would consider U.S. companies, and innovation is largely occurring in the U.S. (and China). Who are the Apples, Googles, Facebooks, Amazons, Alibabas and Tencents of Europe? The truly excellent European companies, such as Louis Vuitton and Luxottica, sport valuations similar to their equivalent U.S. peers; they aren’t bargains.

In addition, Europe is more heavily weighted to industrial, financial, utilities and telecom companies, the latter two sectors to which economist Charles Gave refers to as “national victims.” Of the top 100 global technology companies only 13 are in Europe – even this small figure is overstated since half of the European contingent are actually consulting companies. In September Mislav Matejka, JP Morgan’s head of global and European equity strategy, pointed out that on a “sector neutral” P/E ratio (i.e. if Europe had the same sector composition as the U.S. market) the euro zone is trading at a premium to its historical average. And if given the choice, would you rather own J.P. Morgan or Deutsche Bank (hint: Deutsche is “cheaper”)?

Superficial valuation comparisons also ignore existential political risk, divergent monetary policy and inferior economic, revenue and earnings growth rates. Britain is in the midst of negotiating its withdrawal from the European Union (Brexit) with potential profound negative impacts to the region. The eurozone’s third largest economy, Italy, has a fragile coalition of populist parties implicitly threatening their continued participation in the common currency. The European Central Bank has imposed negative deposit rates across Europe creating a massive tax on its banking system; there are still trillions of European bonds trading at negative yields. Although the U.S. is in the midst of tremendous societal turmoil, this is largely in the realm of politics, not policy, and has yet to impact economic growth and earnings.

So what have investors gained over the past decade by shifting allocations towards Europe? The Euro Stoxx 50 index, which is a blue-chip representation of the region’s largest and most liquid stocks, is approximately flat from where it traded 12 years ago; the S&P 500 has more than doubled in value over the same period (Chart 1). 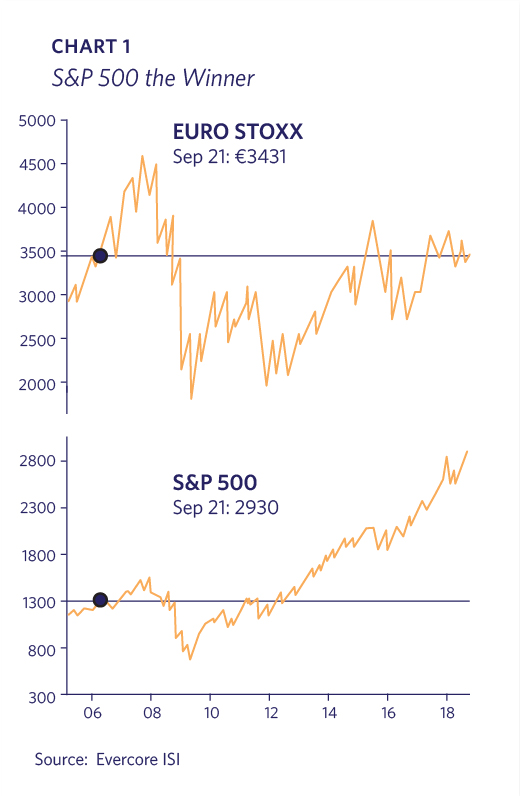 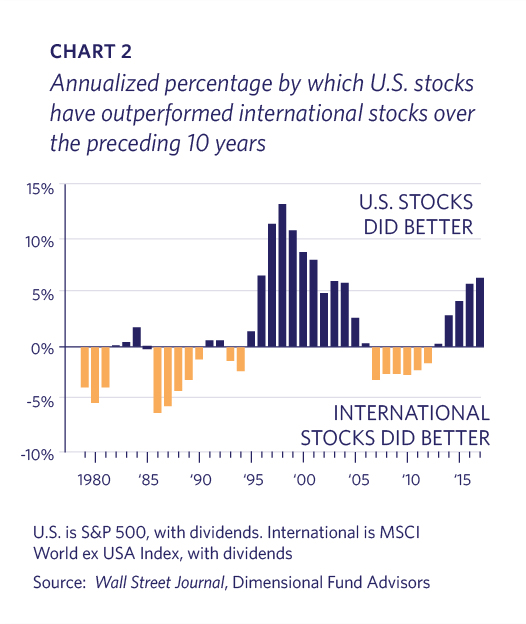 Foreign exchange can be a significant factor impacting returns for a U.S. investor; a stronger U.S. dollar tends to hurt international returns and a weaker dollar helps them (Chart 3). However, comparing Chart 2 against Chart 3 shows that U.S. outperformance against international stocks, including Europe, has often occurred since the mid-1990s regardless of the direction of dollar strength. 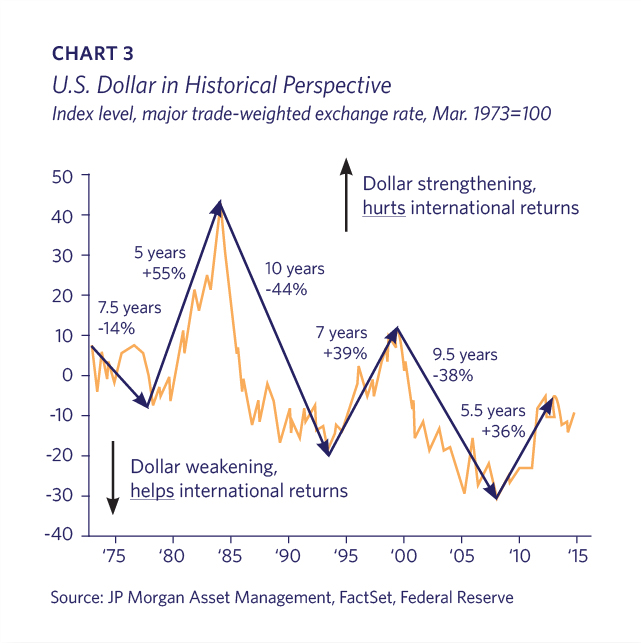 A large number of factors contribute to the relative market performance, but we attribute the primary differentiator to U.S. leadership in 21st century industries. The U.S. is home to the global disrupters driving new industries; China is the only other domicile where a cluster of innovation is occurring on a large scale. Many of these new companies have very profitable software-centric and scalable business models sporting high margins. These companies need fewer employees than banks, physical retailers or utilities. The stock market rewards these factors with higher valuations. We also note that it is unlikely a coincidence that U.S. outperformance started in the mid-1990s when the “internet” first emerged in its nascent stage. It is also illustrative that the market value of U.S. stocks has grown rapidly from the mid-1990s to exceed those of the euro area by almost four times (Chart 4). 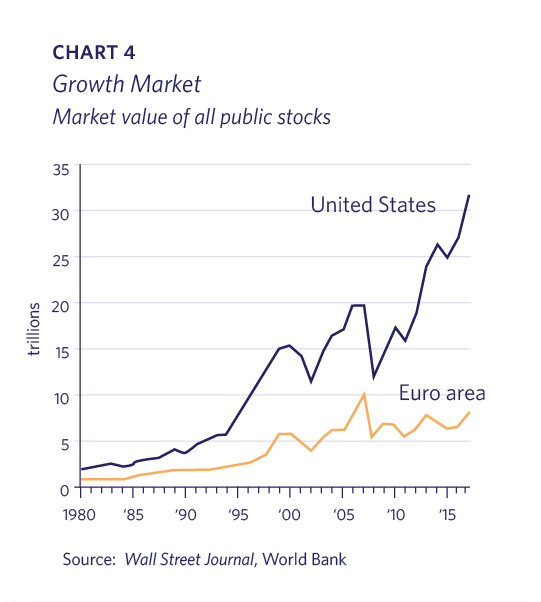 Corporate governance and employment rules also play a role. European companies contend with stricter labor laws and more private sector unions. In 1999 the introduction of the euro common currency didn’t help entrepreneur flexibility as hoped. As a result, they are less nimble managing their workforces. Due to the aforementioned factors, the profitability in Europe is materially lower than in the U.S., with consistently inferior returns on equity (Chart 5). Lower returns on equity deserve lower valuations. 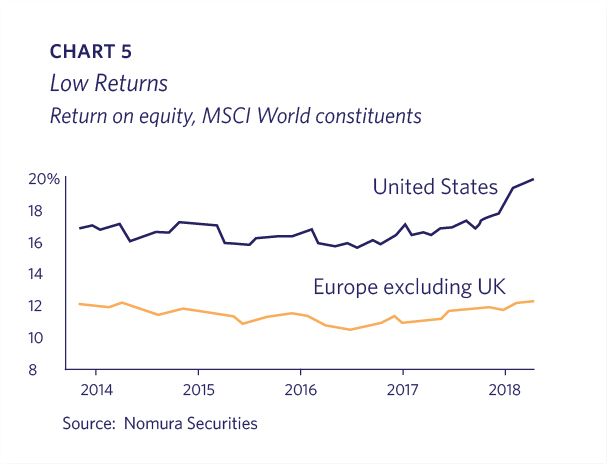 Lyell Wealth Management’s decision to resist investing in Europe (and Japan) has rewarded our clients over the past few years. The S&P 500 has outperformed the MSCI EAFE index (the benchmark for Developed International stocks) by over 27% from June 2016 through September 2018. Countless Barrons and Wall Street Journal articles have highlighted that many financial advisers have had their client portfolios invested as much or more in international stocks than U.S. companies over this time period. During 2018 robo-advisers, such as Betterment, Future Advisor and SoFi, had almost half their clients’ stock allocations in international stocks; Acorn had the smallest robo allocation to international stocks, but still at a substantial 23%.

There will certainly be periods when the European markets outperform the U.S. markets, most likely due to relative currency movements. However, without substantial changes improving competitiveness in the innovative industries, we don’t see sustained superior performance by Europe in the intermediate term. As managers of taxable accounts, we look for multi-year trends, not trades.

Lyell Wealth Management is not captive to a U.S.-centric investment approach nor are our portfolios constructed for nationalist reasons. There are glimmers from Europe, such as Spotify and Ayden, that innovative leadership companies are emerging. It is very possible that future entrepreneurs won’t immigrate to the U.S. and will build their companies elsewhere. We will evolve our investments over time as economies, markets and companies adapt. For now, we will stay closer to home.