The global economy had a massive shock in early 2020 when the Covid pandemic erupted and shutdowns ensued. Despite a big rebound, U.S. real GDP was still 3.4% below its peak as of the end of September. To put this economic hit in perspective, the GDP drop still remaining to be recouped is equivalent to the entire decline of the 2008-2009 Global Financial Crisis (Chart 1). 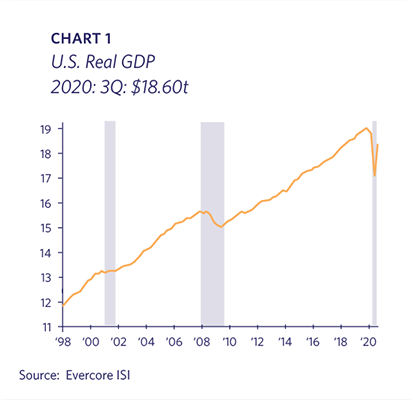 The economy continues to add back jobs, but as seen by continuing jobless claims, U.S. employment is a long way from pre-Covid levels (Chart 2). 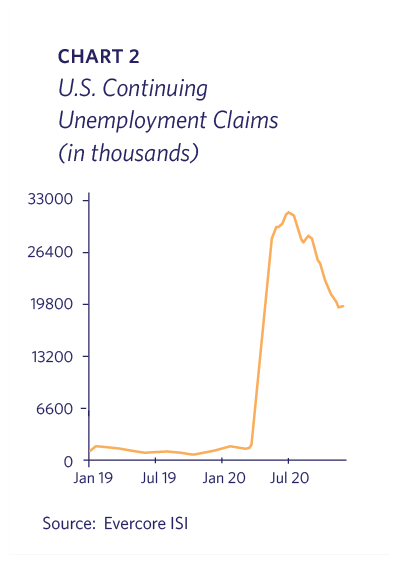 The CARES Act early in the pandemic provided a critical bridge to millions of Americans and many businesses. This fiscal package was inefficient but provided essential support to many. Real personal income, and therefore consumer spending, would have plunged without the transfer payments (Chart 3). 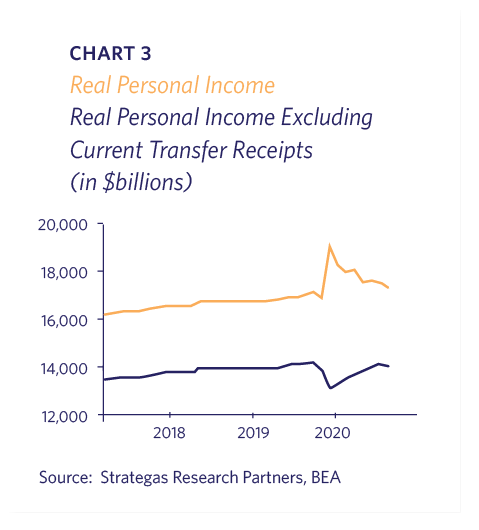 The Covid economy has had big winners and losers. Many digital businesses have thrived, while in-person and physical activities have collapsed. Moving people around (i.e. airlines) is in a major economic depression, while moving things around (i.e. trucking) is booming (Chart 4). 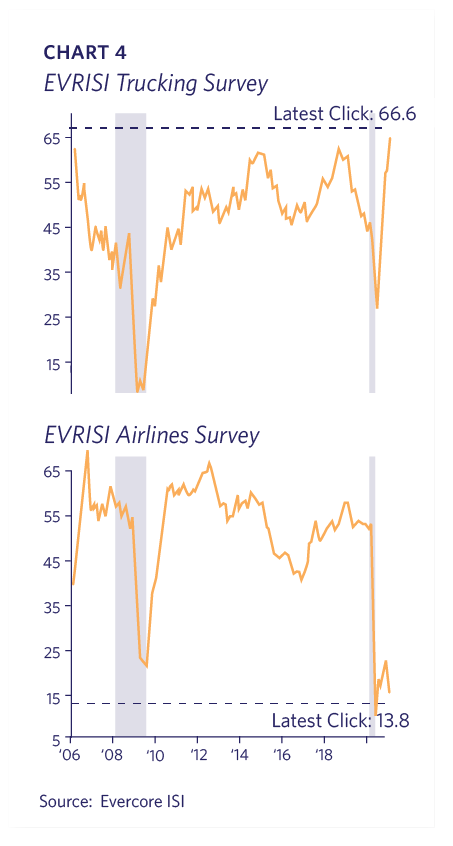 In 2020 we saw the stock market seemingly decouple from the economy. As Lyell Wealth Management has pointed out previously, publicly listed companies are not representative of the overall economy. Public companies are more global and product-oriented with higher profit margins due to their scale. S&P 500 earnings are now forecast to hit all-time highs in 2021 – an important factor propelling the market higher (Chart 5). In addition to the huge fiscal response, overwhelming central bank action preempted a more prolonged and severe economic depression. The major central banks purchased more than $8 trillion in assets in 2020, which increased their collective balance sheets over 40%. In the four months from mid-March to mid-July 2020, the Federal Reserve bought 20 times the amount of securities that it purchased over 18 months during the Global Financial Crisis (Chart 6). Interest rates are determined by multiple factors, although central bank activity is certainly a primary driver. Global short rates are historically low, and there is now over $18 trillion in debt trading at negative yields (Chart 7). 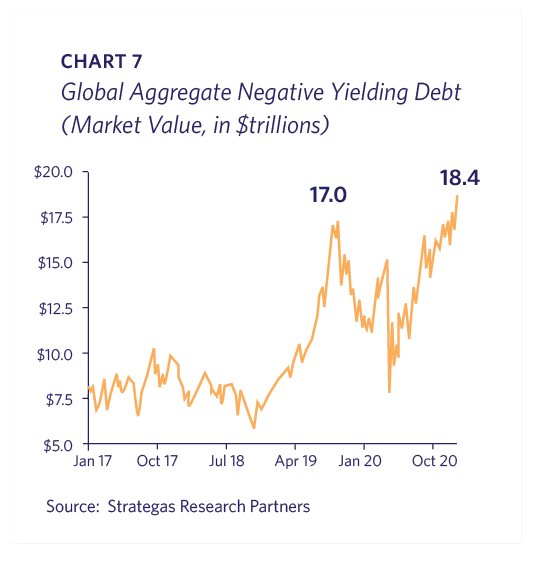 Low interest rates have enabled companies to strengthen their balance sheets and build cash reserves. The U.S. set records in corporate bond issuance during 2020 for both investment-grade and high-yield issuers. These companies were able to extend their debt maturities, and at lower interest rates in many cases. Refinancing allowed some companies to avoid bankruptcy. Corporate credit spreads, which widen during times of financial stress, have normalized and are back near pre-Covid levels (Chart 8). The Federal Reserve and other central banks are holding “real” interest rates negative. This means that actual yields are lower than the rate of inflation. It creates enormous incentive for investors to seek out assets which potentially offer inflation-beating returns, such as real estate and stocks. Of profound importance, the Fed has clearly communicated that it intends to hold real rates negative for a considerable period of time (Chart 9). 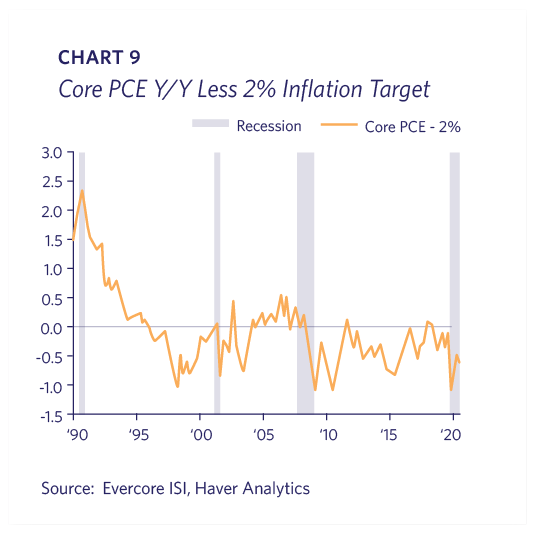 Investing is a relative discipline, as a prospective investment must be evaluated in comparison to other alternatives. Interest rates have been declining for several decades, and stock valuations should be viewed in context of the interest rate environment. “Earnings yield” is the inverse of a Price/Earnings (“P/E”) ratio, so a 20x P/E equals a 5% earnings yield. The S&P 500’s forward earnings yield continues to offer a significant premium to the 10 year U.S. Treasury yield (Chart 10). U.S. consumer net worth has spiked due to soaring stock and home prices as well as the government fiscal action. Money supply (“M2”) growing at a 25% annual rate is not coincidental to this boom in asset values. National averages undoubtedly ignore millions in desperate economic shape, but high asset prices provide key support for consumption and investment (Chart 11). Multi-decade low mortgage rates coupled with strong household formation have created a booming housing market. The virus also clearly influenced some apartment dwellers to move to single-family homes. It was a strange juxtaposition in 2020 that a reeling economy would have robust housing demand. National U.S. home prices have increased 8.4% year-over-year. Both the number of home sales and prices have soared (Chart 12). There is a lack of inventory of single-family homes. The U.S. is likely to see strong growth in the home-building sector in the upcoming years. Construction typically generates significant add-on effects as new homes need furniture, appliances, landscaping, etc. (Chart 13). The dollar value of dividend payments set another record in 2020, as S&P 500 distributions increased slightly over the prior year. This record was despite 42 companies suspending their dividends during the year (Chart 14). 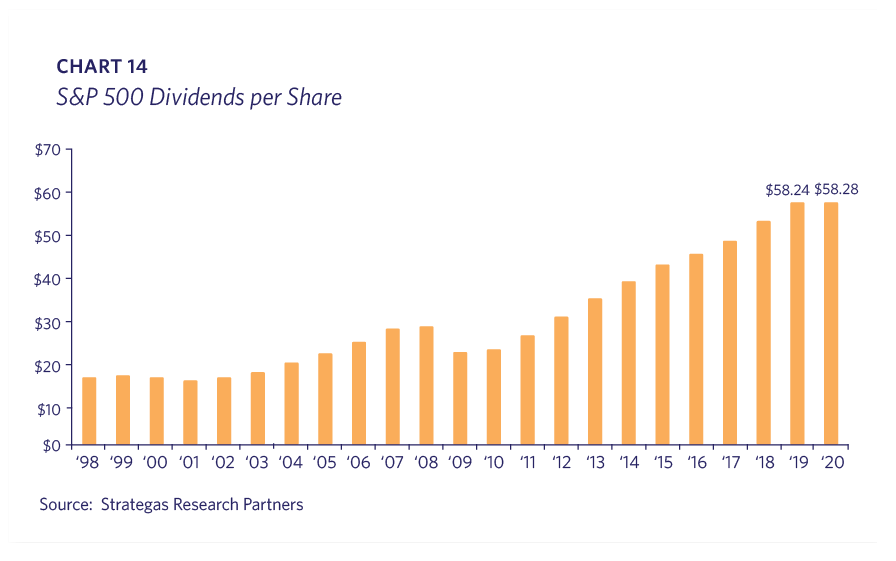 In recent years critics have pointed out that the U.S. stock market’s strength was “narrow” meaning that a small number of huge technology companies were disproportionately responsible for the market’s rise. In contrast, the 2020 rally was the broadest in over seven years with 90% of stocks trading above their 200-day moving average by year-end. The “average” U.S. stock has had a difficult last three years. But during 2020’s fourth quarter the Value Line Arithmetic index, in which each stock is equally weighted rather than skewed to the largest companies, decisively broke out into a bull market. This market breadth is confirmed by strength across many equity sectors, such as Emerging Markets, International Developed, Small Caps, and many Cyclical stocks. Other asset classes, such as Industrial Metals, Credit Default Swaps and Corporate Spreads, also confirm a risk-on environment. This degree of broad-based strength is not historically consistent with a stock market top (Chart 15). 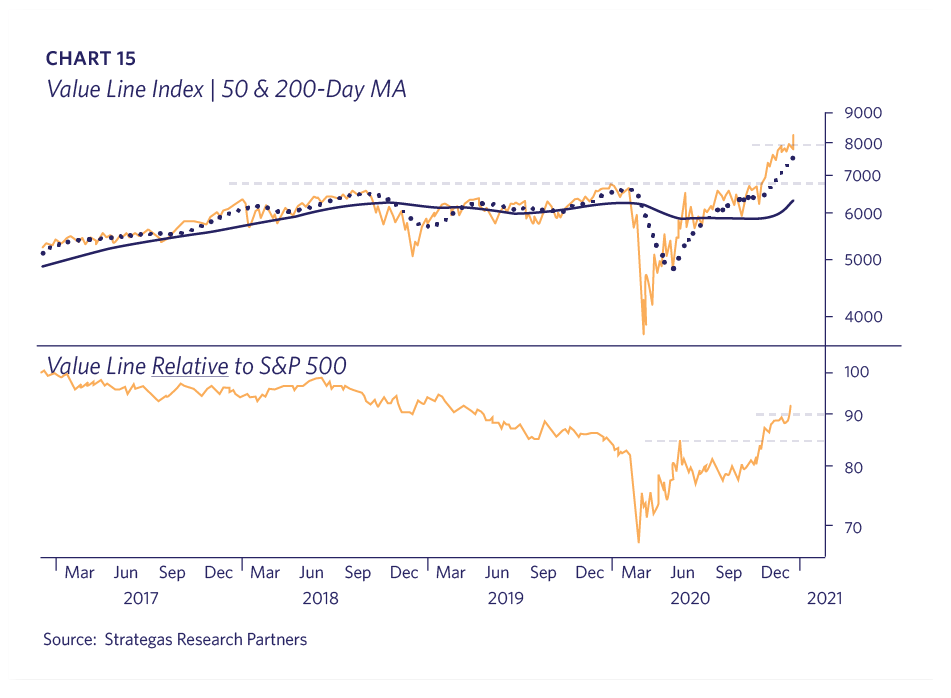 That is not to say that there hasn’t been frothiness and excess. Speculators trading off twitter feeds certainly resemble the 1990’s “day traders,” and the number of new brokerage accounts opened suggests exuberance. Recall, though, in recent years we have seen bubbles from bitcoin to legalized marijuana to non-carbon energy and now crypto-currencies again. The prior bubbles’ bursting didn’t torpedo the broader market. One typical bubble indicator is the amount of money raised by IPOs, and a record was indeed set in 2020 (Chart 16). We have seen more established businesses, such as AirBnb, Snowflake Computing, Palantir and DoorDash, publicly list via the traditional IPO process. These companies are unquestionably valuable and not analogous to the conceptual companies floated in the dot-com era; this is not to say that their post-offering trading levels haven’t been euphoric. However, much of the clear excess of new issue activity has been via Special Purpose Acquisition Companies (“SPACs”).

This heretofore niche exploded in 2020 as companies in unconventional industries (gambling, cannabis) or without finished products (electric vehicles and their components) could access the stock market more quickly than the traditional IPO process allows. These companies and Wall Street have capitalized on investors’ hunger for new concepts and quick riches. SPACs also benefit from a regulatory loophole enabling them to hype their stocks on social media, which is forbidden for conventional IPOs. SPACs represented over half of the “IPO” equity raised over the past year (Chart 17). 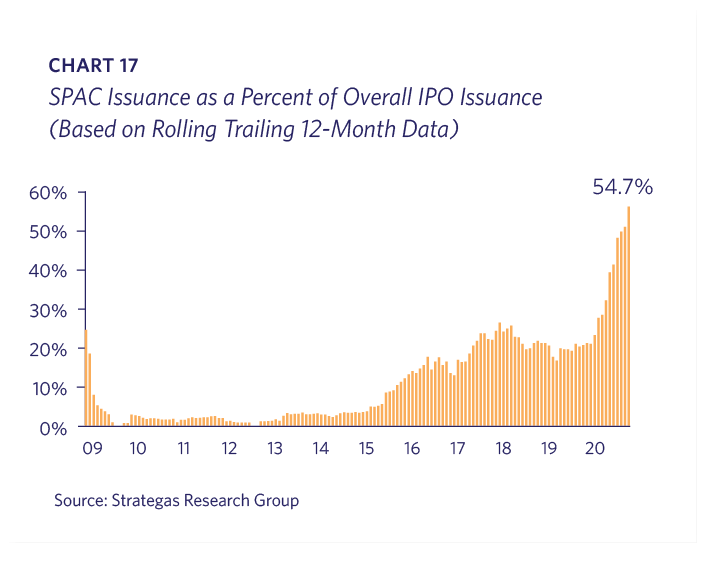 The popularity of SPACs instead of IPOs is a reminder that capital, like water, tends to flow around obstacles or regulatory frameworks. Despite the well-intended regulatory structure of the IPO process, it is expensive, time consuming, and distracting. If financiers see an opportunity to sell new securities to the public, they are very effective at finding a way, especially when demand is so strong.

It is interesting to note that U.S. stock market returns are near the bottom of the modern-day range when viewed over a longer-term perspective. The below-average twenty-year returns are influenced by the measurement starting near the dot-com market peak (Chart 18). Lyell Wealth Management is skeptical of timing the market beyond incremental portfolio adjustments as this requires an investor to make two correct decisions – when to sell and when to buy back in. Over the past 25 years, an investor would have achieved an 8% annualized return by staying fully invested and ignoring market volatility. Missing just a handful of the best market days over that period would have dropped annualized returns by almost 2%. 2020 provided another important lesson for those tempted to wait until “the coast is clear,” as missing just the five best days resulted in a negative 20.5% return versus a positive 14.6% increase for staying fully invested (Chart 19). Lyell Wealth Management navigated 2020’s tumultuous markets by making it a priority, before we had ever heard of Covid, that each client had sufficient liquidity to support their lifestyle. This asset allocation ideally allows clients to sleep better at night. In practice, it enabled us to avoid selling when the market plunged in March. Fortunately, we had considerable exposure to disruptive companies that are benefiting from ongoing technological and consumer tailwinds. These leading companies have come through the crisis in a stronger financial and strategic position.

As we enter the new year, investors are faced with a number of reasons for optimism as well as anxiety. The current investment landscape is supported by tremendous liquidity, very low interest rates, growing corporate earnings, and pent-up consumer demand. However, these facts are well known, and some analysts feel that the market has largely priced them in. Stocks are likely vulnerable to disappointment should the economic reopening not go as planned. We are already seeing glimpses of the operational challenges associated with the first-ever global vaccine rollout. Finally, there is a chance that interest rates may rise faster than the stock market can weather, should the bond market return to pre-Covid levels.

In addition to the economic and virus risks, there are the political unknowns. We foresee marginally higher corporate taxes and tighter regulation on certain industries. However, the Democrats’ thin margins in the Senate and House make the more controversial initiatives unlikely. We do expect a large additional fiscal stimulus package to be authorized early in President Biden’s term. More difficult spending and tax trade-offs will occur, but not until the economy has recovered.

Taking everything into consideration, it is our base case that the market will generate further gains in the year ahead. Volatility is likely to remain high, as the various pros and cons listed above battle for control of the narrative. This moment reminds us of early 2018 and 2020, when the market had rallied substantially through the end of the previous year and into the new one, leaving it vulnerable to a sharp pullback. We remain focused on the long-term outlook and expect any such corrections to be temporary and, ultimately, buyable.

Lyell Wealth Management thinks that many of the companies which thrived through the pandemic will remain winners as Covid recedes. These companies have significant competitive advantages and are addressing large markets. Their long-term outlooks remain very positive and we will continue to hold them. We have also been selectively adding investments poised to outperform as the world reopens. As always, we will maintain diversification and liquidity in portfolios at a level commensurate with each client’s goals and temperament.