The global economy and markets navigated a rocky summer of accelerated Covid-19 infections despite widespread vaccinations in much of the developed world. The re-opening has been more modest than anticipated in the late spring, and predictions of a modern “Roaring Twenties” have at the least been deferred. Questions regarding virus mutations and the vaccines’ lasting efficacy have also resulted in the realization that Covid-19 will be with us for years or decades.

Despite that, the over-arching picture is one of continued healing. The economic shutdowns of 2020 were unprecedented, as were the size and scope of policymakers’ reactions. To expect anything other than an uneven recovery is unreasonable. Although regulations and policies vary across countries, states, and localities, the world has reopened significantly relative to 2020. Many aspects of life, from in-person schooling to domestic leisure travel and live events, are trending towards “normal.” Lyell expects that this process will continue to play out over the coming quarters, with progress coming in fits and starts, as we eventually transition from economic recovery to expansion.

U.S. company surveys have weakened a bit since the summer, but remain well above long-term averages. (Chart 1). 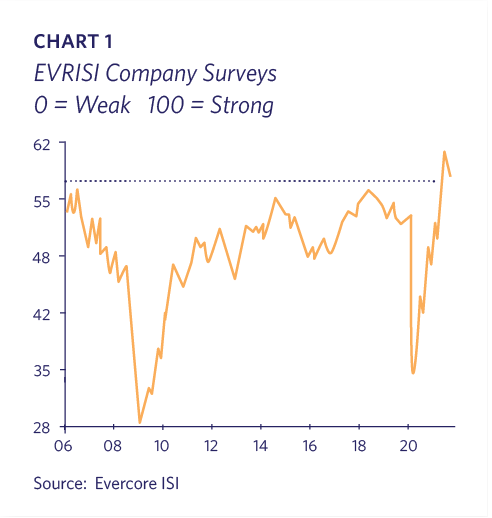 Strong sentiment extends to Europe even though its economy has been more severely affected than the United States by Covid, and its fiscal policies less generous (Chart 2). 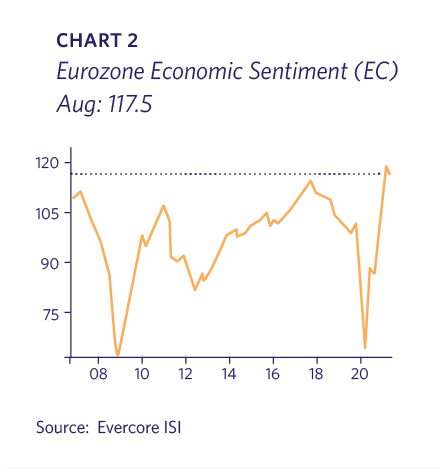 U.S. corporate profits surged in Q2 to a 45% quarterly annual rate and are already much higher than their 2019 peak. Lyell Wealth Management prefers to compare today’s data with 2019 numbers, given last year’s pandemic-induced abnormalities. More than 75% of S&P 500 companies reported better Q2 earnings than in the same quarter in 2019 (Chart 3). Corporate profits typically roll over prior to recessions, whereas they are now accelerating out of one. 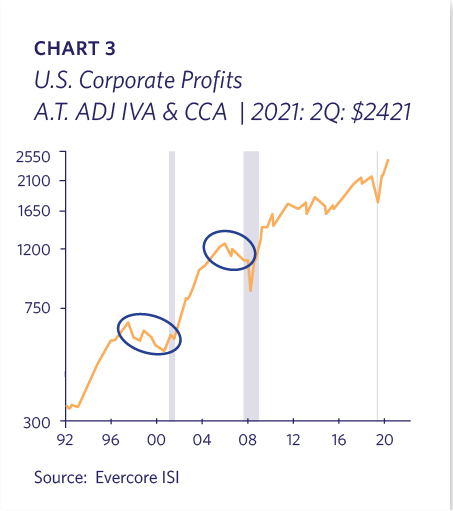 Earnings expectations for the upcoming year continue to increase. S&P forward 12-month earnings per share expectations are currently ~$212, and Lyell Wealth Management expects the final numbers to exceed these forecasts. Growth companies should continue to deliver impressive results, while more economically sensitive companies will benefit from strong product demand and more accessible services as the economy continues to re-open (Chart 4). 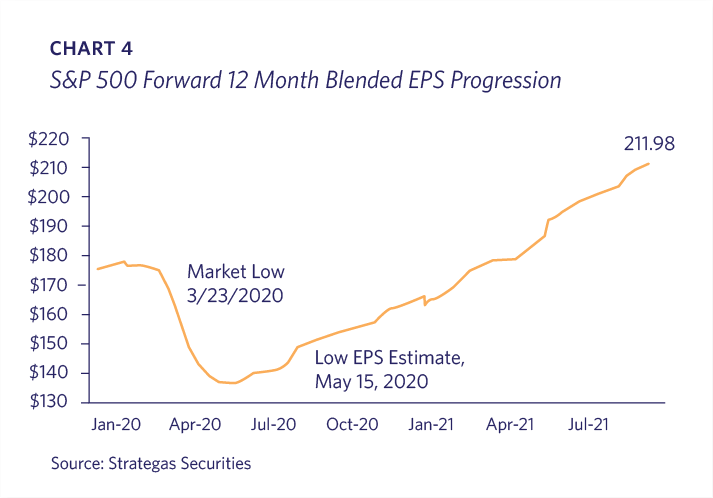 Trucking activity and pricing are at multi-decade highs due to the high level of economic activity. There is a high correlation between GDP and trucking (Chart 5). 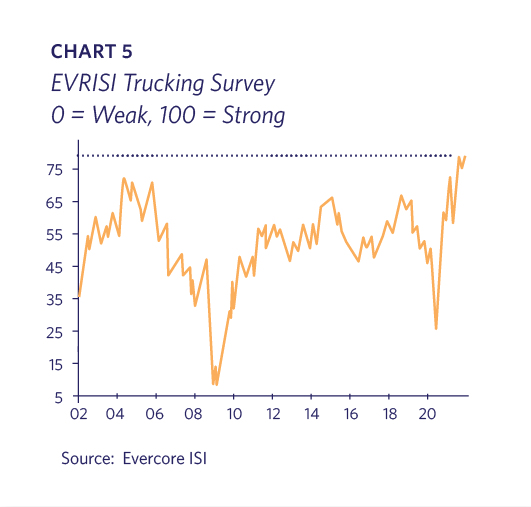 Labor is scarce and employers across almost every industry are desperate for workers. The JOLTS (Job Openings and Labor Turnover Survey) report has surged to all-time highs (Chart 6). At the same time, the U.S. is still five million jobs shy of pre-Covid employment levels (Chart 7). 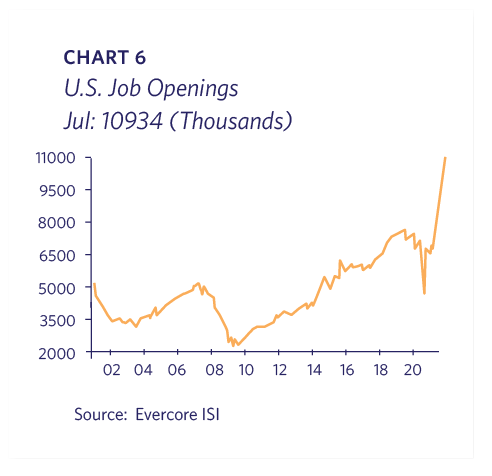 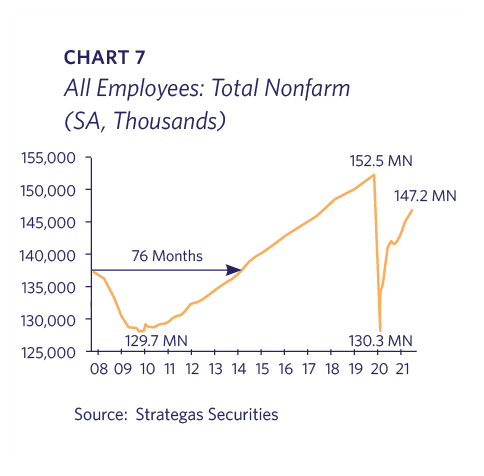 Compensation is increasing at a meaningful pace as companies compete for labor (Chart 8). Lyell expects that the distortions present in labor markets will slowly resolve, as extra unemployment benefits expire, in-person schooling resumes and fears surrounding Covid retreat. Undoubtedly, though, this will take time. 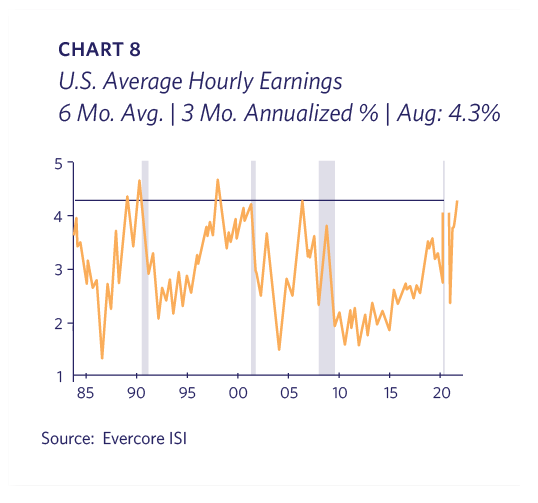 In addition to costs rising due to labor shortages, prices have increased for many goods and services due to supply chain disruptions and unanticipated demand. Semiconductors, lumber, and used cars are highly publicized examples. But are these increases likely to be sustained? Iron ore and lumber have experienced significant price declines after their run-ups, but these market-clearing corrections have not been widely reported (Chart 9). 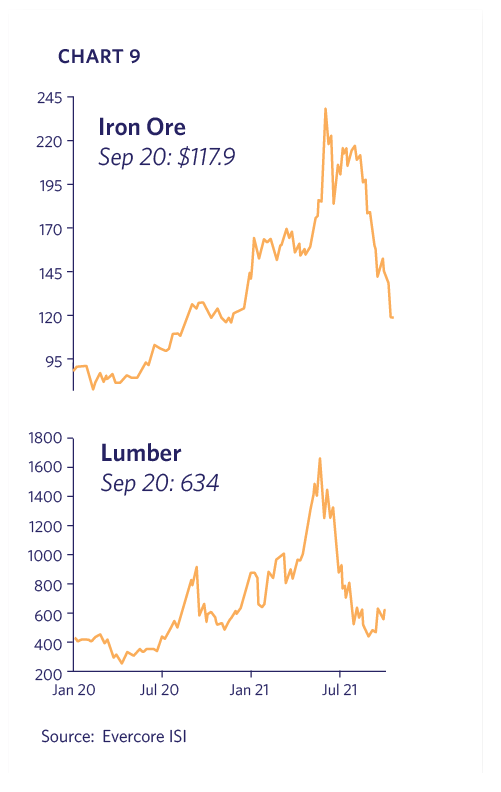 In general, companies have thus far been able to pass much of the costs onto consumers, as illustrated by the number of small businesses raising selling prices and pricing power surveys of manufacturers, retailers, and consumer staples companies (Chart 10 and 11). 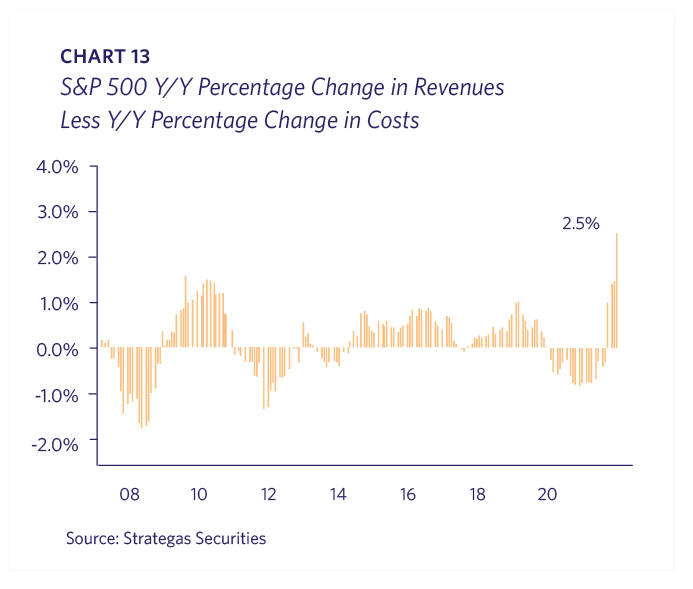 Inflation is a concern both because it erodes purchasing power and because the “cure” of raising interest rates will eventually lead to recession. The Federal Reserve categorizes current higher inflation as “transitory” due to Covid-related disruptions and has vowed not to change its accommodative stance unless proven otherwise. The data thus far appears to support the Fed. Covid-sensitive items currently exhibit much higher inflation than economic segments insensitive to the virus (Chart 14). This fits Lyell Wealth Management’s view that, although it will take time, supply-chain disruptions and demand excesses will be resolved and affected prices will moderate. The elevated inflation concerns are primarily caused by the pandemic-induced unprecedented fiscal and monetary actions. Much has been made of the huge increase in money supply, but it has been matched by a decline in money velocity, which continues a two-decade trend (Chart 15). The soggy money velocity indicates that consumers are transacting at a slowing pace in relation to the currency in circulation, and therefore making inflation less of a concern. A pickup in velocity with today’s money supply levels would mean higher inflation. In addition to the Fed’s current view that rising prices are “transitory,” it is important to recall its commitment to “symmetrical” inflation-targeting. In September 2020 the Fed made a major policy shift to allow inflation to run above its long-term 2% target after over a decade of falling below that level; 2% would be an average, not a ceiling. Coupling “transitory” with “symmetrical” should mean continued very accommodative monetary policy for the foreseeable future. The resulting negative real interest rates will continue to stimulate economic activity and asset prices.

Incredibly, over 50% of U.S. sovereign debt matures within the next three years. This short maturity profile makes it extremely expensive for the Federal Reserve to allow interest rates to rise very much. With $22 trillion public debt outstanding, each 1% increase would translate into an additional $220 billion contribution to the budget deficit (Chart 16). The combination of strong economic activity, impressive ongoing earnings growth, and highly stimulative monetary policy has resulted in rising stock prices. 2021 has delivered the sixth best performance for the S&P 500 through August since 1950. Returns have historically skewed positive for the remainder of the year in these prior periods. Valuations are high, but likely justifiable in this context. Price/earnings ratios are lower than they were during the 1960s “Nifty Fifty” era and during the Dotcom bubble in 1999-2000, while interest rates are much lower, gross margins higher, and reported earnings temporarily depressed due to the pandemic (Chart 17). While the overall market remains near its all-time highs, the “average” stock has already pulled back fairly significantly. The S&P 500, Nasdaq 100, and Russell 2000 have been buoyed by the performance of their largest companies, while the rest of the market is already well off its highs. For example, as of this date the S&P 500 is 2.3% below its all-time high, but the average stock is down 11.3%. This suggests a market that is less overheated than it may appear at first glance (Chart 18). Lyell Wealth Management is regularly puzzled by commentators referring to “better” valuations internationally, when those overseas markets are mostly comprised of lower growth, staid companies in the industrial, energy, financial and health-care sectors. The U.S. markets have far more innovative and disruptive companies represented, so the valuation gap has little to do with geography. The higher valuations are more easily understood when one realizes the U.S. market has lower earnings volatility and stronger earnings growth (Chart 19). 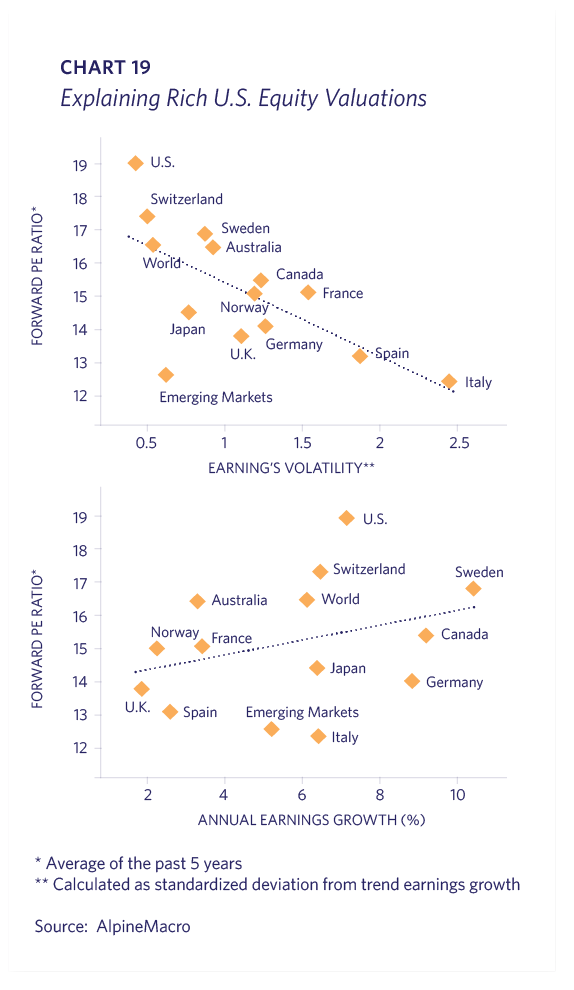 The fall is often a volatile time of the year, and there are widespread expectations for a market correction. There are certainly many visible issues that might prompt one, such as brinkmanship over the government debt ceiling or tax policy changes. There has been a significant increase in bearishness in the past few weeks. However, sentiment is typically a contrarian indicator, so this shift may suggest that any upcoming bad news is already priced in. As always, we will be monitoring credit spreads for signs of a more serious problem and a larger stock market drawdown. For now, credit spreads are placid (Chart 20). The size and composition of the fiscal package being debated in D.C. is to be determined, but already various tax increases have been moderated from President Biden’s initial proposals. The past several years have shown how challenging it can be to predict the results of these negotiations, and unlikely outcomes have at times become reality. Little has been priced into the market as of yet, with stocks sensitive to tax changes largely performing in-line with the market overall. The latest assessment is that higher tax rates may reduce U.S. corporate earnings by approximately 5% in 2022. This would represent a market headwind, but not necessarily a major impediment if we can learn to co-exist with Covid.

To paraphrase Mark Twain, each recession is unique, but there are usually similarities. One typical element is the jagged nature of recovery. A major upheaval occurs, policymakers scramble to respond, and then societies and markets struggle to adapt to the new post-crisis reality. These phases take time, and rarely proceed in a straight line. The current hand-wringing over supply disruptions, inflationary spikes and potential policy changes is quite normal at this stage of the cycle. There are no guarantees, but “double-dip” recessions are extremely unusual. Lyell’s base case is for continued recovery, and for the highly stimulative environment to propel “risk assets” higher over time.