Investors enjoyed a tremendous 2017. An improving economy and ample global liquidity resulted in rising stock markets with unusually low volatility. This environment lasted through January, while February ushered in a market correction which is still underway. Lyell Wealth Management sees numerous changes occurring in the investment landscape. These shifts contribute to greater market volatility, but they don’t portend an end of the current bull market in stocks.

The global economy is stronger than at any point in over a decade. Corporate earnings are growing due to global synchronized growth, a weaker US dollar and tax cuts. In the first quarter of 2018, S&P 500 earnings increased by 15% from a year earlier. Further corporate incentives such as 100% capex expensing and the ability to repatriate overseas cash at low tax rates are icing on the cake. Employee bonuses, increased M&A and stock buybacks are all in evidence as a result of the tax package. Evercore ISI is projecting S&P 500 earnings of $170 by the end of 2019 versus the $125 for 2017 (chart 1). We are seeing elevated levels of confidence across virtually every segment of the economy. Small business optimism is at the highest level in 45 years. Homebuilder confidence is at a cyclical high. During 2018’s first quarter the Business Roundtable CEO Economic Outlook reached its highest level in the survey’s history, and their outlook for spending, hiring and sales is the most positive in over 15 years (chart 2). 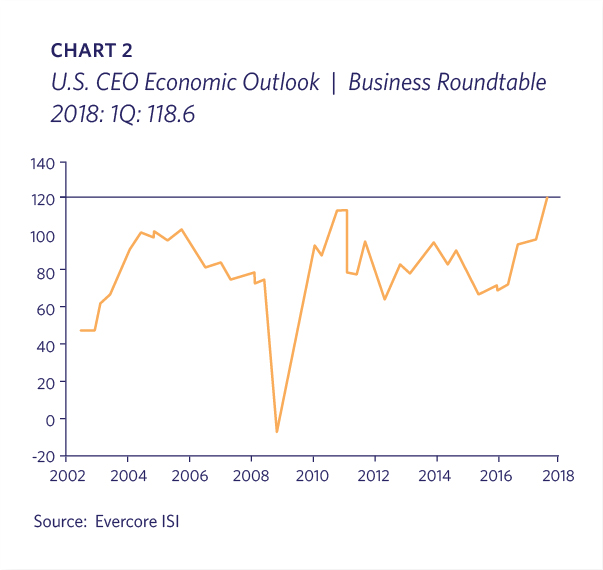 Regulations are being rolled back for banks, energy companies and many other industries. In March Congress quietly removed several Wall Street regulations that were passed after the Financial Crisis. Meanwhile, U.S. oil output has surged to the highest levels in 40 years. Although the longer term impact of these regulatory reversals can be debated, they are positive for current economic growth.

Wages are increasing and the tax cuts have increased after-tax income for most Americans. Consumer confidence is at a cyclical high (chart 3). The U.S. economy’s real growth appears to be heading towards a 3% annual rate versus the 2% average in the years since the Financial Crisis. 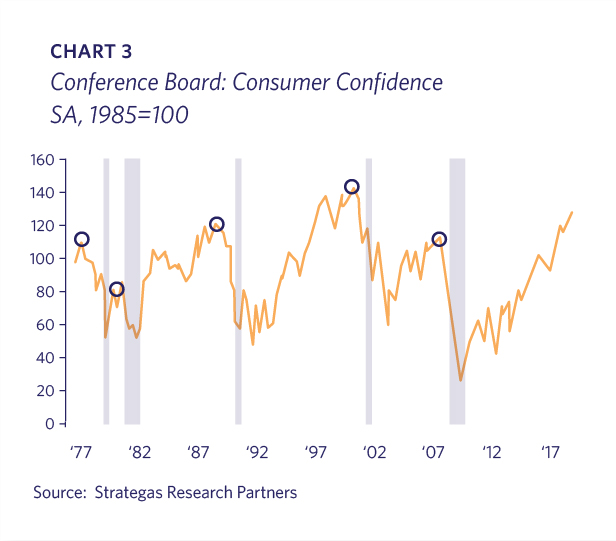 The fiscal stimulus on top of a growing economy at or near full employment has caused the markets to react. The previous status quo of moderate growth with lingering fears of a deflationary bust has been replaced by expectations for higher economic output with potentially more inflation. The markets are on edge for signs of growth that is “too strong.” Despite seemingly little slack, U.S. average hourly earnings are only increasing at a 2.7% rate (chart 4). Wages have historically accelerated more quickly later in the cycle. The markets typically have trouble as wage increases near 4%, so this data is being monitored closely. 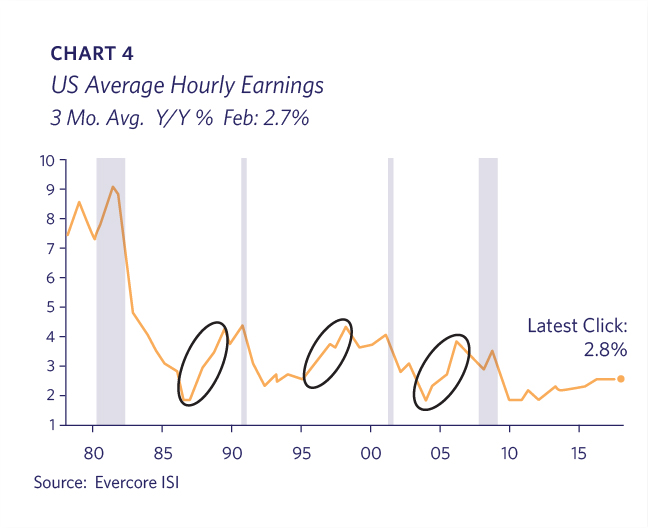 The current economic expansion is over nine years old, making it one of the longest in U.S. history. The expansion has been notable for its sluggish growth and despite its length has yet to achieve the average cumulative GDP increase of prior expansions (chart 5). 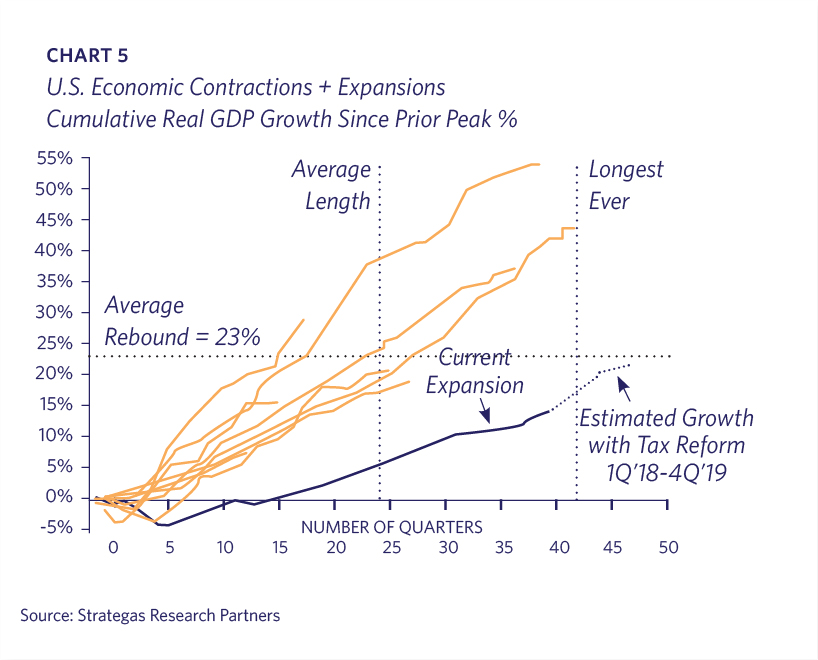 Cyclical spending as a percentage of the economy remains near recession lows and is nowhere near the highs that typically precede recessions (chart 6). The recently enacted tax package not only reduced corporate rates but also created incentives for increased investment spending. These stimulative policies suggest that better growth is still ahead and that this expansion could have several more years left. To borrow Strategas Research Partner’s Jason Trennert’s basketball analogy, it appears only now that “the shot clock has started on this economic cycle.” 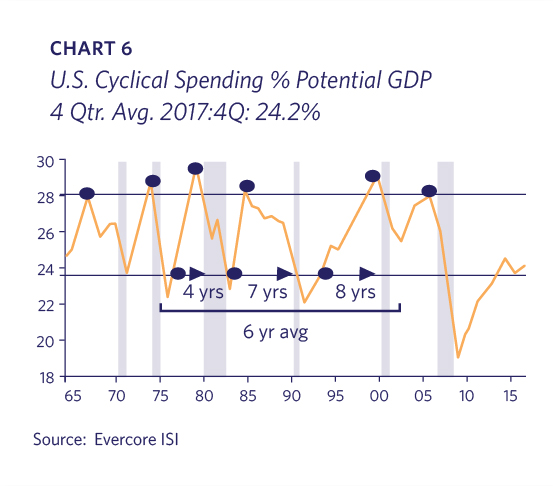 As a result of the improved economic climate, the Federal Reserve is trying to “normalize” and increase short-term rates at least up to the inflation rate. Quantitative Easing (“QEî”, aka buying bonds) by the Fed is now over, but the European Central Bank (“ECB”) and Bank of Japan (“BOJ”) continue to add trillions more to their collective balance sheets. The three central banks presently own over $15 trillion in securities (chart 7). 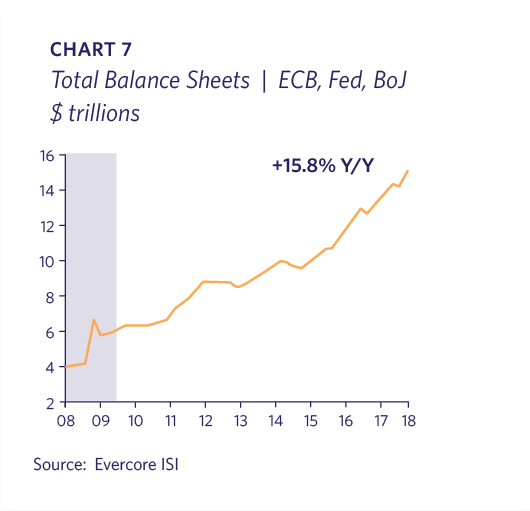 However, at the margin, QE is winding down as the end of this era comes into view. Interest rates are backing up as growth improves, deflation fears recede, and the central banks slowly reverse or discuss reversing their unusually low or negative rate policies. Directionally, the factors driving interest rates to the lowest in history are changing. The multi-trillion dollar question is: how high and how fast can interest rates rise? Some prominent market participants have called the end of the 35 year secular bull market in bonds (chart 8). A transition appears underway toward higher rates. 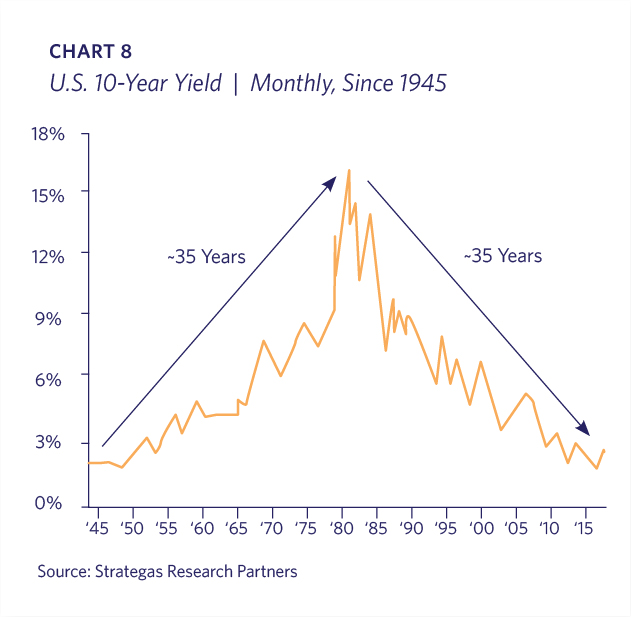 Lyell Wealth Management views liquidity as perhaps the most important variable for the financial markets. The central banks have intentionally created very “loose” financial conditions for many years. We are closely watching for changes in global liquidity, which can be indicated in money supply, credit spreads, yield curves, and equity and currency markets among other places. Despite the Fed’s shift in QE, overall financial conditions have been improving, which should be positive for the economy and markets (chart 9). 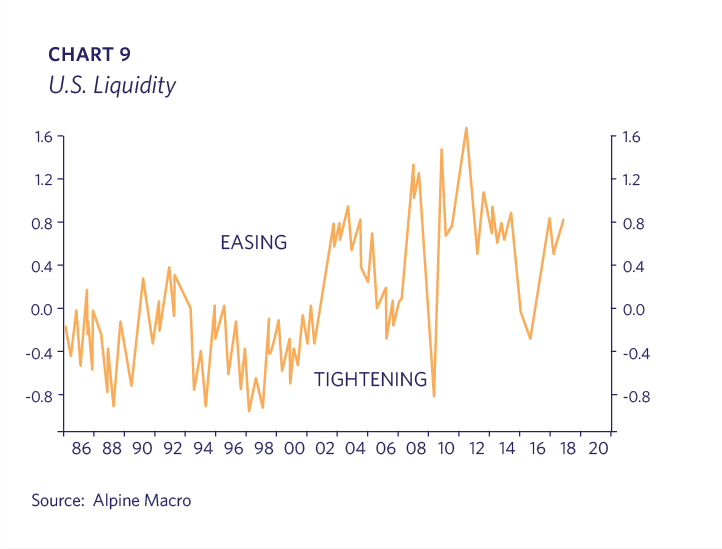 2017 was a historic year for the U.S. stock market. For the first time, the U.S. stock market increased each month in a very strong year for returns. In addition to its consistent progress, the market was also remarkable for its suppressed volatility; investors became accustomed to a steady expansion enhanced by extremely low interest rates. By the end of January 2018 the S&P 500 had gone 310 trading days without having back-to-back declines of 0.5% or greater; this far surpassed any prior period (chart 10). 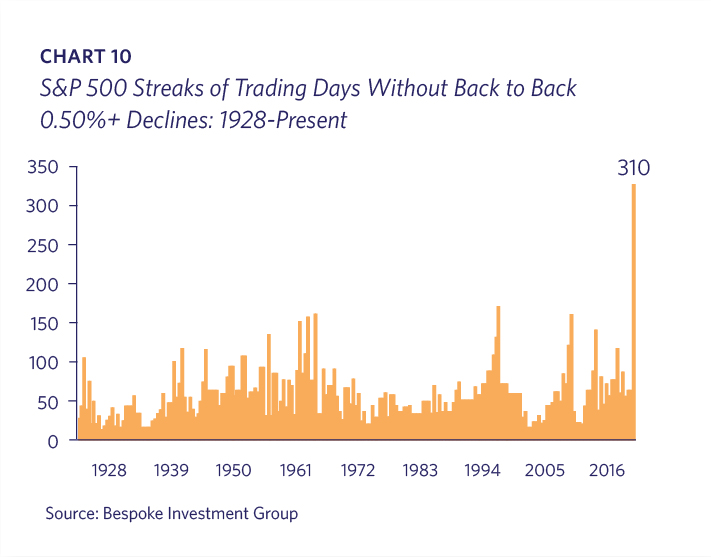 The market correction in February 2018 re-introduced larger daily moves in stock prices, and so far this year over half of the trading days have experienced intra-day moves greater than 1% (chart 11). Although the market feels “rocky,” volatility is in fact back to a normal level and likely to continue during the upcoming year.

Some market observers have expressed concerns that the leading Tech companies, oft referred to as the FAANG stocks (Facebook, Apple, Amazon, Netflix and Google), are dominating the stock market. This concern references the overvaluation in the Tech sector leading to the eventual popping of the dot.com bubble. However, in March 2000 the Technology sector represented 35% of the market capitalization of the S&P 500 despite representing only 13% of its earnings; this is in stark contrast to today when Technology companies are 25% of the market cap but also 24% of the earnings weight (chart 12). The revenue, cash flow and (in most cases) earnings growth of these leading companies is unprecedented. 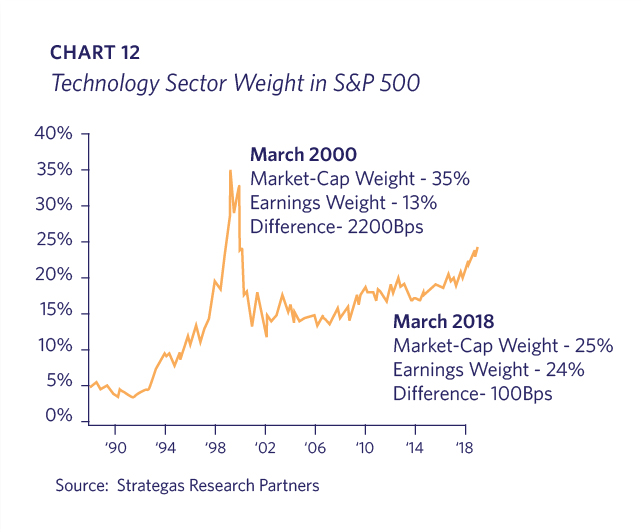 As a result of the market presence and influence of these leading platform companies, they are receiving ever increasing media and political attention. Most recently, Facebook is under extreme scrutiny due to mishandling its data prior to the last election. In the midst of this news, the European Union floated the concept of taxing larger internet companies on a percentage of their revenues in each country where their customers are located. As referenced above, it has been Lyell Wealth Management’s view that the valuations for many of these leading companies were justified; however, we are monitoring these developments very closely with an eye towards punitive regulatory, tax or legal actions that would impact their growth and profitability.

The Trump administration is unpredictable, with policies difficult to discern within its communications blizzard; it is often impossible to differentiate substance from noise. Elements of the President’s policies are populist, such as trade tariffs; this reinforces the market’s focus on inflation’s awakening. The first mid-term election normally results in a significant setback for the incumbent President, and this upcoming November election is shaping up well for the Democrats. Certainly the special elections thus far have shown a motivated Democratic base and turnout. Given the growing strength of the economy and employment, it is still premature to predict how sizable the losses will be for Republican seats and whether they will lose the House or even possibly the Senate. Markets generally dislike uncertainty, but this President appears to relish it. It seems reasonable to assume that politics will insert uncomfortable levels of volatility at times throughout the year. Market corrections during mid-term election years are common, but generally buyable (chart 13). 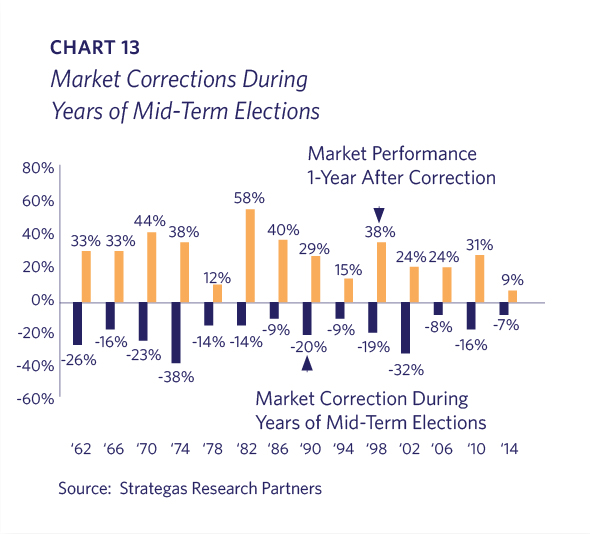 Populism is not only a real issue within the United States, but also in Europe. Germany’s recent election weakened Angela Merkel, while Italy’s renegade Five Star party won the most votes in the March national election. Lyell Wealth Management has avoided European investments due to the Continent’s feeble banking system, grossly overvalued bond market, and its periodic renegotiations of their monetary, but not fiscal, compact. We will continue to watch Europe from the sidelines and celebrate when their occasional successes benefit our investments in U.S. companies which do business in Europe.

The two biggest stock market fears are interest rates rising too high and/or too rapidly and trade wars that escalate with unintended consequences. President Trump has made it clear since his campaign that he believes the global military and trading framework in place since post-World War II needs to be readdressed. How the Administration will incorporate other issues, such as compliance with NATO military budget commitments, NAFTA re-negotiations or cooperation on resolving the North Korea situation, to create exemptions to his tariffs is impossible to predict.

The Trump administration is trying to alter America’s commercial relationship with China. Due to China’s contribution as the largest global growth engine and its intertwined relationship with the U.S., a miscalculation by either side would lead to serious economic disruption. However, we trust in President Trump’s self-interest, and the stock market will certainly dramatically reflect major missteps of economic policy. The President’s trade strategies are ultimately likely to be self-correcting as behaving otherwise would be political suicide. The Chinese Communist Party is highly strategic and unemotional in pressing China’s interest. It is unlikely to over-react in irrational ways. Lyell Wealth Management expects market turbulence around the public parts of the ongoing tensions with China, but that a near-death experience will be avoided for the next few years.

Lyell Wealth Management views the economic strength and earnings growth as conducive to continued positive stock market returns. We do not see an economic recession on the horizon. Since bear markets typically begin with recessions, this informs our positive outlook. Recessions almost always start after the Fed is done tightening, the yield curve inverts and the ratio of leading to coincident economic indicators has started to decline; none of these things has happened (chart 14). We do expect a bumpier ride going forward, however, with more volatility as the investment paradigm for almost a decade appears to be shifting. The years since the Financial Crisis have been characterized by uninspiring economic growth, ample liquidity, suppressed interest rates, and low inflation. This has benefited investments such as long maturity bonds, “short volatility” strategies and overvalued stocks whose sole appeal was a high dividend. We seem to be in the midst of a reversal in these trends.

We keep in mind that external shocks can also cause bear markets in stocks. Unpredictable U.S. politics along with existential issues, such as North Korea, make us mindful that economic statistics do not present the complete picture. In addition, the world has never seen this level of central bank experimentation with negative interest rates and bond buying. The move towards “normalization” will inevitably break things along the way, just like we saw in early February with the implosion of several “short volatility” strategies.

Lyell Wealth Management manages each portfolio to meet customized objectives. In general, client portfolios reflect our optimistic outlook; however, diversification across asset classes remains a key point of emphasis. If our base case scenario of economic growth, improved earnings and positive stock returns proves accurate, our growth-oriented investments should be rewarded. In the event the equity markets are hit by a negative shock, the buffers we have in place should dampen portfolio volatility.