Last year was a turbulent one for investors in which virtually every asset class ended flat to down. As noted in the August Tug of War Perspective, Lyell Wealth Management shifted to a less bullish, more balanced outlook towards the markets last summer, as we saw positive fundamentals being confronted with difficult-to-handicap uncertainties.

The S&P 500 declined 4.4% in 2018, which was its worst performance since 2008; however, it felt much worse as the market dropped 13.5% during the fourth quarter and almost 20% from peak to trough. From 1945 to present the average maximum drawdown for the S&P 500 during a calendar year has been 14%, so 2018’s drop was larger than normal. The fact that the collapse happened at the end of the year made for more discomfort. Since WWII there have only been a dozen years that experienced bigger S&P 500 drawdowns within the year than in 2018 (Chart 1). 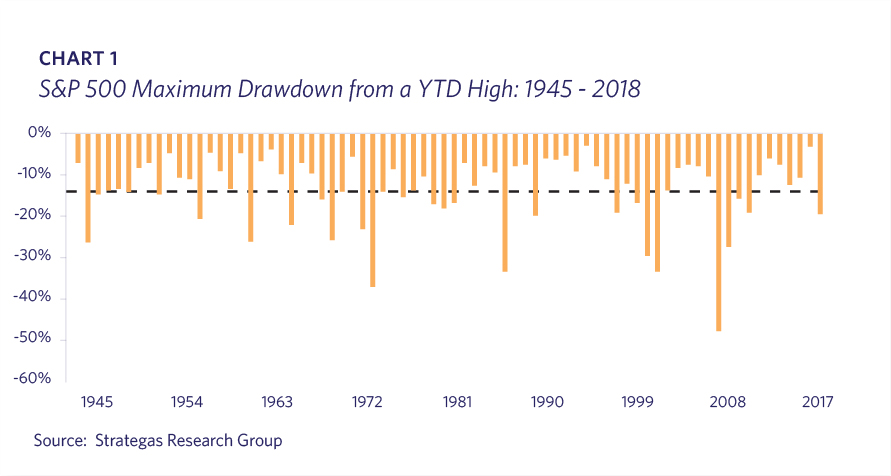 It should be noted that the U.S. market’s positive performance through September was at odds with almost every overseas market. Despite its poor showing, the U.S. market was still much better than almost every other stock market in 2018. The International Developed Index (EAFE) declined 16.1%, and the Emerging Markets index was down 14.3% for the year.

Rising U.S. interest rates during 2018’s first three quarters created periodic market volatility. It is not a coincidence that both stock market corrections started when key technical resistance levels were breached on the 10 year Treasury yield. The minor increase in 10 year yields over the year from 2.41% to 2.68% misses that it reached 3.25% in early October. As a result, bonds were not a great hedge for stocks; the U.S. bond index was flat after spending much of the year with negative returns.

The stock market’s drop may seem strange, as the U.S. economy exhibited strong economic growth along with a corporate earnings increase of over 20% for the year. However, stock markets are forward looking, and a number of issues weighed on the market. In fact, it is very possible that it was the large number of headwinds that cumulatively created the problem. The issues, some of them inter-related, included:

The synchronized global growth that began in September 2016 acted as a tailwind until early-2018. European economies have now slowed to a pace that risks recession; Italy may already be in recession. Inconclusive negotiations between the United Kingdom (“U.K.”) and the European Union (“E.U.”) have increased fears of a “hard Brexit” whereby the U.K. leaves the E.U. without agreeing on transition terms; the E.U. bureaucrats in Brussels have no incentive to make an exit easy, as they want to set a punitive example to any other country considering this path. Most importantly for global growth, China’s economy has been exhibiting weakness not seen in many years.

Management teams have increasingly cited tariffs and uncertainty related to trade as drags on commercial activity. Surveys in early 2018 suggested that corporations would significantly increase their capital expenditures in response to the December 2017 tax cut legislation; it is now clear that many of those plans were put on hold likely due to the trade conflicts.

The U.S. economy has slowed from its earlier above-trend growth, although the recent data indicates continued solid expansion. Some economic activity was pulled forward in 2018 as a result of tariff fears and potential supply chain disruptions, so the recent declines were likely exaggerated as was the earlier growth. Business and consumer confidence remain high albeit down from peak levels. Consumer spending is healthy. Employment statistics are the strongest in decades, and there are new entrants increasing labor participation. Business surveys cite finding qualified labor as their top challenge. Manufacturing and services readings are still firmly indicating expansion. However, primarily due to overseas weakness and the perception that the tax cut benefits are past, there are predictions of a recession in 2020, and even some for this year.

The new Federal Reserve Chairman has been learning the importance of being precise and not “speaking off the cuff.” The Federal Reserve handled the communications around its last interest rate increase on December 21st so poorly that it caused a major stock market sell-off into Christmas Eve.

There were legitimate worries that the stock market’s big Q4 drop could be self-fulfilling in terms of crushing business or consumer confidence. However, there is little hard evidence suggesting a U.S. recession is imminent. Economic expansions typically end due to excesses and mal-investment. If the key issues facing the market are confronted successfully, as they were in 2016, then a good argument can be made that this correction has wrung out some excesses and further extended the expansion. This is analogous to having a moderate earthquake that releases the tension and avoids the “Big One.”

Fortunately, there has been progress on many of the most important issues challenging the market:

As a result of real or perceived progress made on the above issues as well as the oversold conditions into Christmas Eve, the stock markets have had an impressive start to the year; the S&P 500’s 8% increase in January was the best in 30 years. During the market sell-off prices fell much more than earnings forecasts, leaving the market more attractively valued than it had been in some time.

It has been Lyell Wealth Management’s view since mid-October that the stock market was unlikely to rebound in a “v-shaped” recovery, and that a bottoming process would take time. The market correction broke longer-term trend lines with considerable technical damage. A re-test at or near the lows would be typical, given the severity of the correction. Almost without exception over many decades, a severe “bang” is followed by a “whimper” whereby the prior low is explored on lower trading volume than the initial drop. Market rallies up to 10%-15% from the lows are common prior to hitting resistance and re-testing the lows. We have found trusted third-party research sources to be very useful in informing our views during this process.

Furthermore, the possibility exists that we have seen the end of this market cycle and are entering a bear market with further drawdowns ahead. We therefore did not aggressively “buy the dip” during the market turmoil, although we did cautiously add positions for some clients with substantial cash allocations. In general, we have been comfortable holding more cash than typical. We have taken a wait-and-see approach until we feel more confident about whether a re-test will occur or if a bear market is underway. Lyell Wealth Management is aware that the post-WWII median bear market decline is 28.4% with some instances that greatly exceed that decline; we all remember the most extreme case in 2008 (Chart 2). The median length of bear markets since 1946 has been 363 calendar days with the longest lasting 630 days. 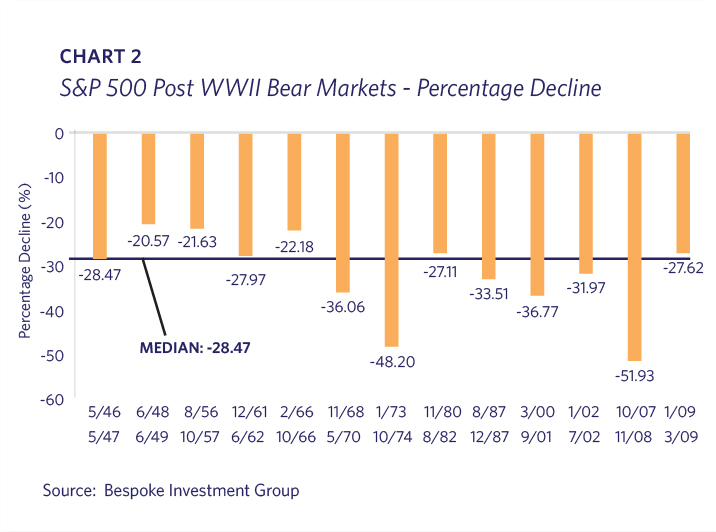 It would be premature to conclude that the January rally indicates that we are past the correction. However, there are some market signals that are encouraging: 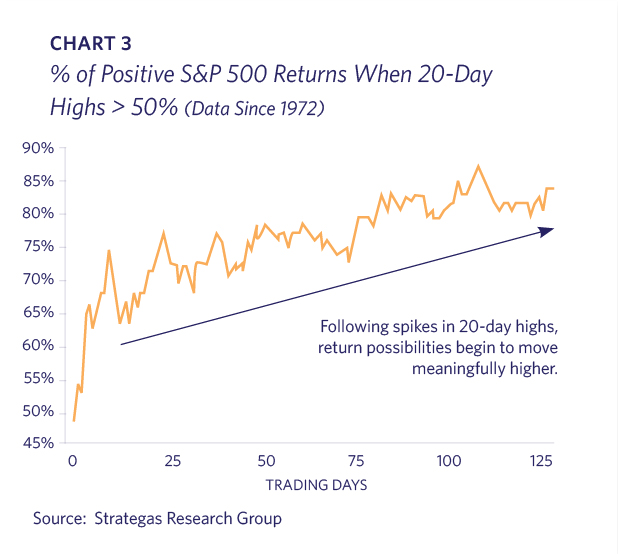 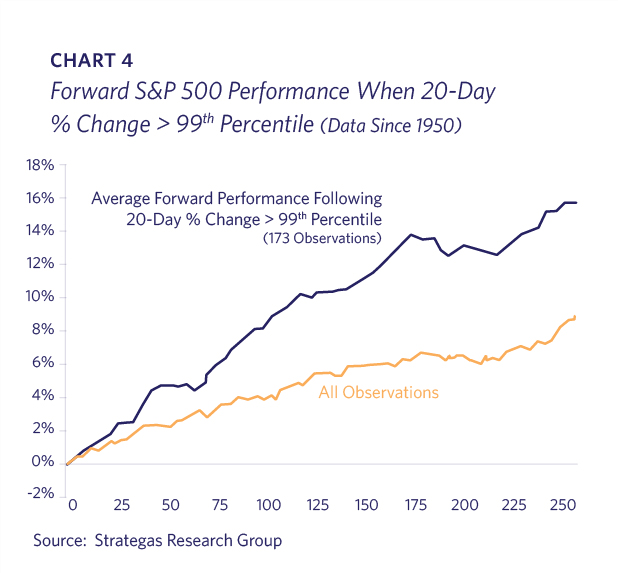 There is no way that all the issues outlined earlier in this Perspectives will be resolved; there are always challenges. However, Lyell Wealth Management has viewed an overaggressive Fed, the China-U.S. trade conflict, and China’s weakening economy as the three most critical issues. The Fed is no longer a problem for now. It is very possible the China trade tensions will soon be put aside until after the 2020 election. It is early but it appears that China’s economy may be stabilizing as multiple stimulus moves are underway. If these three issues are in fact put to rest, then the underpinnings for a good 2019 are in place. It is also worth remembering that stock markets are typically strong in the twelve months following a mid-term election due to the incumbent President wanting to stimulate the economy ahead of the next election. Since 1928 the S&P 500 has increased 12.8% on average in Year 3 of the Presidential cycle (Chart 5).

Regardless of positive developments, there will inevitably be some bumps throughout the year. Volatility is a normal condition, not an exception. One predictable cause for market disruption will be the debt ceiling negotiations which could include re-opening the 2017 tax bill.

Lyell Wealth Management customizes each client’s asset allocation to meet their specific objectives with as little volatility as possible. Asset classes such as private real estate, fixed income and managed futures, are employed specifically for rocky periods such as the current environment. Stocks should achieve superior returns to most alternatives over longer time periods, but the volatility can be disquieting. Temperamentally, most of us are hard-wired to sell when the better decision is likely to stand pat or buy. Lyell Wealth Management views it as part of our role to help clients stay the course and not liquidate risk assets at the wrong times. The S&P 500 annualized returns from investing starting at the market peaks of 1987, 2000 and 2007 would currently exceed 9.4%, 5% and 7%, respectively (Chart 6). It is a worthwhile reminder that a patient investor can weather market turmoil even if portfolio entry occurred at the worst possible time. 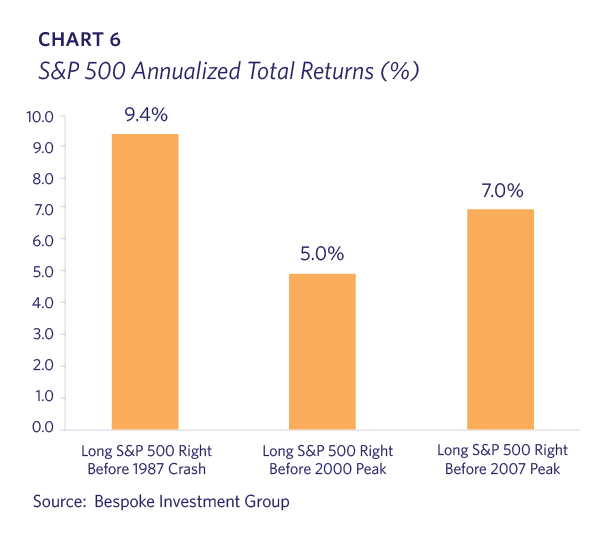